JOSIE AND THE PUSSYCATS - SELF TITLED 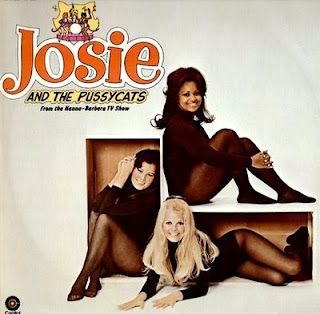 When Hanna Barbera were preparing to launch the cartoon series "Josie And The Pussycats" they decide to create a female pop band to perform music for the show (and to generate some money on the side).  After a selection process Cathy Douglas, Patrice Holloway and Cherie Moor were chosen to be in the band. Years later Cherie would become a star on "Charlie's Angels" under the name Cheryl Ladd.

There was controversy from the beginning when the producers of the show decided that the character of "Valerie" should not be African American and therefore wanted Patrice Holloway fired from the band to create an all white trio. However, the band's management threatened to pull out of the project and after 3 weeks Hanna Barbera relented.

The music is a mix of original tracks and covers of songs by Bread, The Carpenters, Bobby Sherman and The Jackson 5. It's pure bubblegum pop but Holloway's singing adds a soul / R&B feel to many of the songs. Hip Hop fans may recognise the "Hand Clapping Song" from a sample Mix Master Mike was using for a while in the Beastie Boy's live show. An extended set was released in 2001 by Rhino Homemade with a pressing of just 5000 copies.

Update - for some reason Mediafire deleted the file within an hour of me posting this so I have come up with a link to the 2001 release which has 19 ( ! ) bonus tracks. Hope you enjoy.

Thanks for the heads up Jeff. I've replaced the link. They can't stop me that easily! If it was for a copyright infringement then it's just laughable.

Bloody brilliant! I loved this when I was a kid and now that I'm not I love it even more! Thanks, Simon

Glad I could be of service.

Great stuff. I especially loved their version of "I'll Be There." Just killer which is unexpected for a media manufactured band. This compilation is just a lot of fun. Bravo!!!!

Ahhh man I missed this. Looks like the link just takes you to a RapidShare site to set up an account.
:(

You just need to wait for the rapidshare site to fully load and then the link will appear. : )